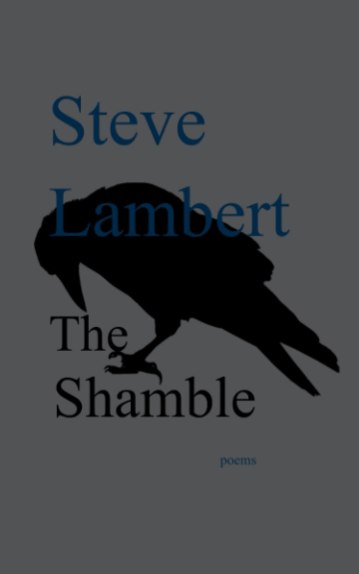 The Shamble is a highly accomplished collection of poetry that serves as a profound philosophical treatise on modern life. Though these poems are extremely personal to Lambert (particularly when he shares vivid reconstructed memories of his childhood, writes of challenging lived experiences as an adult, and paints portraits of specific locations from his travels), there is a universality to them, and his (at times world-weary though never self-indulgent) wisdom is present on every page.

There are four distinct sections to this collection, each able to stand alone but with common threads that subtly tie them together—meditations on love in all its forms, youth and aging, family and belonging, environment and unbelonging. Lambert’s observations of the natural world around him are captured beautifully. The second part of this collection, ‘In Eysham’, consists of poems set in England and Wales, and I was so impressed by Lambert’s perfect(ly accurate) descriptions of the geography, weather and mood of my homeland: Lambert is American, and he has written about my lifelong surroundings far better than I ever could!

I also loved the poems that Lambert penned as tributes to/after some of the great English poets (Clare, Wordsworth, Larkin). It was interesting to read these poems and feel the sense of history that weighs heavily on the shoulders of all modern artists at work today, the sense of knowing what has come before and feeling responsible for what comes after, the pressure that comes with creating but also the joy and privilege of writing.

The ‘Concerning…’ poems in this collection provide fascinating philosophical insights from the deepest corners of the mind of the modern man. The poems concerning genealogy and legacy I particularly enjoyed, and I found to be personally thought-provoking. There are frequent flashes of existentialist and nihilistic thought throughout The Shamble which were interesting in turn—lines like “All things / carry within / some undoing.” and “Tomorrow is just today, again. / Every poem could be titled “Sisyphus.”” stuck with me.

I mentioned themes of belonging and unbelonging in these poems; I got the impression that the speaker of the poems frequently felt unmoored in life, often finding himself in the wrong place physically and/or mentally, either overtly or subconsciously seeking meaning wherever he goes (meaning in his days, in his art, in his relationships, in his existence), perpetually seeking the great elusive Something while confronted with the mundanity of reality. These philosophical investigations give this collection such depth; I thought this especially when I read part 4 of the book which features several poems written in 2020 at the start of the pandemic: however cynical the speaker may feel about the world (in lines like, “The Big Whatever made whatever. / The dysfunctional bureaucracy / of things: // we politely die while you / lean on your shovel.”), family and love are the constants in his life, and he knows it.

There is an underlying darkness to these poems that follows the speaker and the reader. Lambert frequently contrasts the past with the present and reflects on youth and aging. The first part is heavy with nostalgia, and a sense of loss prevails throughout (sometimes an obvious loss, sometimes abstract, undefinable). The poems about his family are poignant and moving, his verse is controlled and assured, his nature writing superb. ‘The Shamble’ is a brilliant achievement, straight from the heart and soul of a hugely talented poet, presented to us in startling clarity, leaving plenty of room for one’s own thoughts.

Poem I couldn’t stop thinking about for days: Gretel & Hansel

Other personal favourite poems: Beachcombing / In St. Mawes / On Learning / The Here and Now and Then / Concerning Things Kafka Said Better