At the bus stop outside my godawful girls’ secondary school, where I have stood waiting for so many minutes, for so many people, for so many signs, I was standing against the railings, chewing on a cherry stone and smoking a cigarette. I was killing time – murdering several of my finite minutes without reason, just because I can – and a young couple came along and stood under the shelter. I guess they were around 14 years old and they looked like any average working-class kid does in London.

These kids were all over each other; they only took a pause between kisses to catch their breath, and the boy only ever opened his eyes to check if the bus was coming. Yes, the sound of their saliva-swapping made my skin crawl and I generally felt sick when I thought about how young love like that always ends badly, especially in this town – he’ll break her heart and she’ll get an abortion, and he’ll sleep with her best friends and in a year’s time they won’t be on talking terms and herpes will be the only thing they have in common. 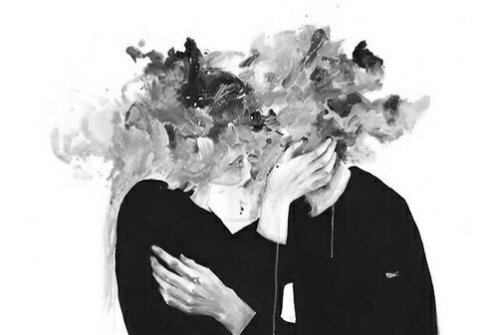 But still, I was so aware of them, their presence. I don’t think I can say I was aware of their passion because I don’t believe that it is possible to feel passion at such a young age. I think that passion can only be felt once you’ve passed through adolescence and made it out alive as an adult. Passion is all-consuming. Passion is blinding. Passion is everything you never knew you wanted. The “passion” exhibited by teens is actually just muddled hormones and sexual excitement/curiosity/pressure. Regardless, I was very aware of this duo who kissed instead of speaking.

I thought briefly about how I was like that once, all excited and scared and thrilled to bits to kiss my boyfriend at the bus stop – we could only kiss as there was nothing to say because we hadn’t yet lived – and suddenly so many memories from the mind of my 14 year old self came falling from the sky like the heaviest of hailstorms.

We were not together for long but this boyfriend holds a huge importance to me as he’s probably the last person to know the “old me”, that is, me before I lost my mind to psychosis, before my first suicide attempt and before I sold my soul to the pharmaceutical companies. After we broke up, my mental health got worse and worse with each passing year. Don’t get me wrong, it was hard for him to know the “real me” because I spent every day fucked up on drink and drugs. I remember after we had been together for a month he said to me, “I’ve never seen you sober.” This was my first ever realisation that my habits were indeed bad ones, but I ignored this fact and carried on, blissfully unaware that I was ruining my life in an irreparable fashion.

I remember all the waiting around we did at bus stops. If I was in his town he’d take me to the stop and wait with me til the bus arrived and vice versa. We wanted to make the most of every minute we had, which basically meant kissing for England. It was cold when I was with him. Summer had just left and been quickly replaced by a particularly harsh Autumn. It was always cold but we would still meet in the park after school since we couldn’t drink in pubs and didn’t have money to do anything else. And with my school kilt rolled up an extra two inches and my blouse button undone in some perverse attempt to make my boyfriend want to be with me (yeah, I know, wtf) I was frozen cold.

And his coat, I remember his coat – how his collar would graze my face as I huddled closer to him, how he’d wrap his jacket around me to warm me up, how I’d put my cold hands in his coat pockets. At least I think I remember his coat. In my memory it’s a black jacket with plastic zips although maybe that wasn’t the jacket he wore all those years ago. Maybe I’m thinking of the coat that he was wearing the last time I saw him, or the coat that I smudged my make-up on when I hugged him on Christmas Eve, six years later.

Maybe I am thinking of the coat he was wearing when I was huddled up to him, drunk, when I was 16, or that time when I was 17, or 18, or 19, or the times when we had (somehow) reached our twenties, when his collar brushed against my cheek as I stood against him, inebriated and scared and sad, waiting for him to kiss me. But I know that he will never kiss me, and so I wait for nothing. At least I remember his kisses – his lips are one of the few memories that I maintain from before psychosis nearly killed me. I bet his kisses are still the same now as they were then. I will never know.

Now when I see him and go to hug him, I feel safe. Passion is all-consuming. Passion is blinding. Passion is everything you never knew you wanted. But now we are too consumed with our own existential crises, we see the world all too clearly and although we don’t know what we want, we know that it is not each other’s kisses at the bus stop in the pouring rain on an October afternoon.