I went to hospital yesterday. A lot of things were said. I don’t really have the strength to talk about all of it.

LC asked C to leave the room and I stripped to my underwear so that she could assess my self-inflicted injuries and I was just looking out of the window, waiting for her to say something. But she didn’t, so I looked at her and noticed she had tears in her eyes. All professionalism was dropped and she said,

‘Oh, God. Look at the state of you. You’re so beautiful and intelligent yet you’ve destroyed your body inside and out. Why?’

I couldn’t answer that.

At the end of the assessment, they gave me some leaflets. One providing useful numbers and contacts to help with my social security benefits applications. One about services available for young people who are carers. Another about charities that can provide support to my dad, so that I don’t have to look after him on my own. The self-referral details for an appointment with the “Alcohol Health Worker.” And information about self-referral to the community drug and alcohol service for this borough.

C and LC agreed that they were not going to refer me to the drug and alcohol service ever again since every time I have been referred to these services (6, 7, 8 times?) I have failed to turn up to appointments. LC said that she has faith that I will refer myself. She said that overcoming addiction will only work if I want help, not if I am being forced to receive help that I don’t feel I want or need. So it’s up to me to help myself. Fuck.

I don’t know what to do. Everyone says alcohol is ruining my life. I know I’m the only one who can stop myself from drinking, but I feel like I can’t. Not now.

I saw my GP this morning; he received the report from A&E yesterday and is really sad about my actions. Plus, LC wanted me to see my GP about the bruises. He said we will ‘keep an eye’ on the bruising, and that it may purely be a result of the overdose. He completed a form deeming me unfit for work, so I should be eligible for benefits. He has referred me to a neurologist because he’s concerned about my shakes but can’t work out why I have such violent tremors in the first place. Then he randomly gave me an alcohol abuse assessment. Of course, I lied in every answer I gave.

How many times in the past year have you felt like you needed a drink first thing in the morning in order to function?
Never.

How many times in the past year have you felt regret or guilt because of alcohol?
Oooh, gosh, erm… once? No, twice. Twice.

Has anyone other than myself expressed concern about your attitudes or behaviours towards alcohol, such as family, friends, colleagues, health workers?
Nope, just you Doc!

Do you think that you have an alcohol abuse problem?
……….no.

Despite presenting myself as a ‘3-pints-once-a-week’ drinker and bullshitting my way through the test, I scored HIGH possibility of alcohol abuse. Un-fucking-believable. So Doc told me to stop drinking. He told me to have apple juice instead of cider. I didn’t know whether to laugh or cry, so I scuttled out of the room.

Well, I’m not going to torture myself thinking about how I’m such a terrible human being and alcohol is the Devil. Nor will I say for sure that I will seek professional help with this and never touch another drop. I’m struggling enough to admit to myself that I need help with alcoholism; I keep making excuses for why it’s essential that I drink, because it helps me sleep, because it makes me feel confident and I have fun and forget about bad things, because I’d be depressed without it, because it’s the best way to make friends, because it’s what unemployed, mentally ill young British girls do. I’ve decided that I’m going to try not to drink for a few days and see how I go. I predict a relapse on Friday but we’ll see. 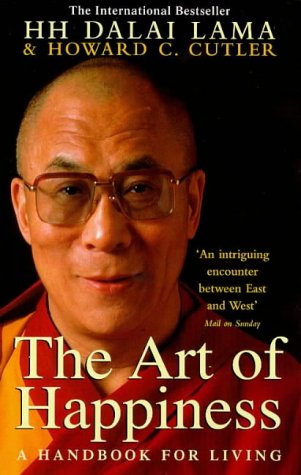 Over the past few years, various people have given me a copy of The Art of Happiness by HH Dalai Lama and Howard C. Cutler. I’ve always been grateful for the sentiment: these people were trying to help, to make me happy, to make me a better person with positive actions and thoughts. But, I’m embarrassed to say, I’ve never managed to read past the Introduction. Whoops. But I spotted it on the shelf just now and felt so drawn to it, I had to pick it up. After posting this I think I will go for a walk (in the opposite direction of all the pubs) and then settle down in bed with Dalai. Reading this book may or may not make any difference to my life but, as before, let’s see how I get on.

I am trying, I promise. x