My mouth tastes of blood. I drag my tongue over my teeth and taste the dirtiest copper pennies and this makes me feel uncomfortable. One of the meds that I’ve tried before made my mouth taste metallic, it was listed as a side effect, but I can’t remember which one and this annoys me. The taste of rust immediately makes me think of Lolita.

My car is limping, Dolores Haze,
And the last long lap is the hardest,
And I shall be dumped where the weed decays,
And the rest is rust and stardust.

So now all I want to do is get into bed and read Lolita but I can’t concentrate because of all the noise; the trains, the police sirens, the fucking lift going up and down, shaking the foundations of this sorry excuse for a home.

I have so many books to read that I don’t know where to begin. There are some books that I want to re-read but I should probably read the new ones first. Someone’s gifted me Patrick Hamilton’s Hangover Square and his trilogy Twenty Thousand Streets Under The Sky but I feel a bit daunted by them because I imagine that he writes like Joseph Conrad and I find his work to be draining at the best of times. My dad gave me Kleinzeit by Russell Hoban a few weeks ago and I still haven’t read it, despite it being under 200 pages in length. I have a dusty copy of How Proust Can Change Your Life by Alain de Botton which I want to read, but I feel like I’ve had enough of him right now, having read his Essays in Love only last week. And I know that once I read it I’ll immediately want to dive into In Search of Lost Time which will consume me and then I’ll want to read it in French and get so wrapped up in it that all the other books on my list will be neglected. 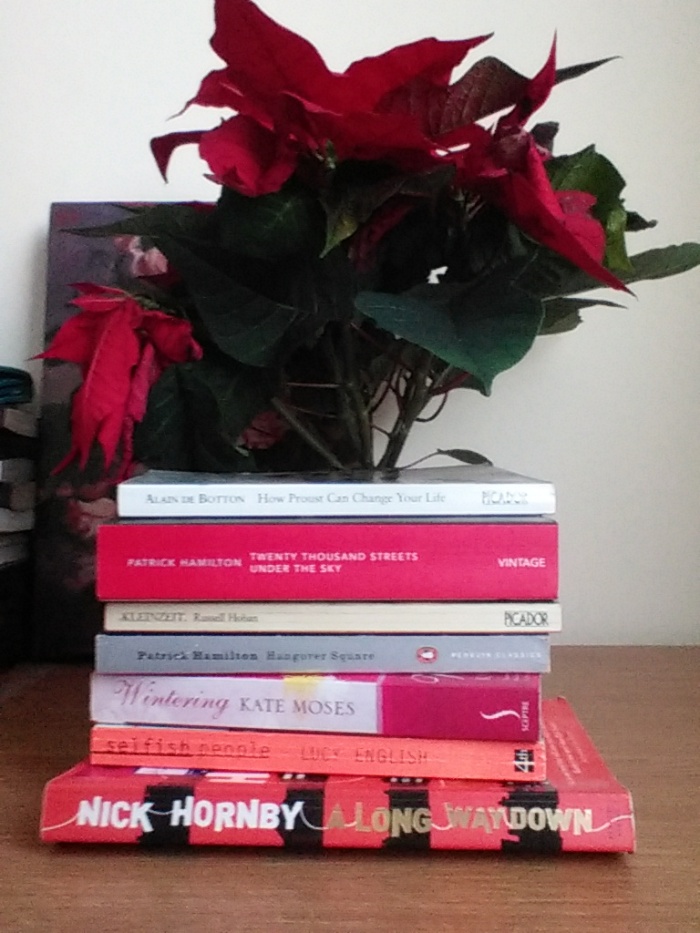 Someone gave me this festive poinsettia yesterday. I think I've killed it already.

I’ve got a few ‘lighter’ books to read too, otherwise I don’t think I’d ever be able to leave the house or get anything done as I’d be too consumed by heavy lit. I’ve got Wintering by Kate Moses which is a novel based on the weeks preceding Sylvia Plath’s suicide so obviously I have to read this. I went to the Oxfam bookshop in Muswell Hill a couple of months ago and picked up Suskind’s Perfume, which I read immediately, and A Long Way Down by local literary hero Nick Hornby. I have been meaning to read it for several years but haven’t had the chance. It centres around the meeting of four strangers at North London’s most popular suicide spot on New Year’s Eve. And I believe that I know which suicide spot was the inspiration for this, and it is a spot that I used to visit often, so I am interested to see how he captures the strange atmosphere of that bridge. Hornby is consistently hilarious so I don’t think this book will be a trigger for me. If I begin to feel like it is then I will stop reading it. Finally I have Lucy English’s debut Selfish People which I discovered by accident when working on the contracts and rights for the book. It tells the story of Leah and Bailey and their ‘anarchic, totally destructive and out-of-control relationship.’ Which sounds all too familiar so deserves a read. I’ve just looked at my copy and it’s signed, how nice. Addressed to Laura, whoever she may be.

Then my books to re-read are:
Lolita by Nabokov
1Q84 by Murakami
The Golden Notebook by Lessing
A Clockwork Orange by Burgess
Dubliners by Joyce,
and Sophie’s World by Gaarder.

Then I’ve got unread books on my Kindle too, aaaaahhhhhh when will this list end?! These include:
Brass by Walsh
We Are All Completely Beside Ourselves by Fowler
Frances and Bernard by Bauer,
and Colorless Tsukuru Tazaki and his years of pilgrimage by Murakami.

I guess my sudden and unexpected unemployment is good. I am just going to lock myself indoors and ignore everyone and read all day and night, unless of course I am otherwise engaged in meeting with strange men and doing silly things because I no longer care about consequences. Blah blah blah. I have lots of new theories about my illnesses but I can’t write them right now because my brain is too busy processing the taste of blood.

This morning I woke up and I wasn’t traumatised by my dreams. For the first time in weeks, I couldn’t remember my dreams. This is brilliant news since all dreams prior to this have not been dreams but rather nightmares. Really fucking bad ones. I’m trying so hard to get some parts of my memory back and I’m reduced to tears when I think about how good my brain was before and how fucked up it is now, but sometimes it is nice not to remember. Sometimes, it is better to forget.

Tell me what you think! x